Sandro Ramirez joined Everton in July, and, luckily for him, therefore didn’t take any part in Malaga’s current season.

That’s fortunate because it means he can leave Goodison Park in the January transfer window, not held back by the rule preventing representation of three clubs in a single season.

Seen as a great bargain signing when he moved to Everton for €6m, it’s likely turned out worse than anyone imagined. In and out of squads under Ronald Koeman, Sandro remains firmly frozen out under David Unsowrth, not being called up once since the managerial change.

Given Unsworth’s clear need for a striker, experimentation there, and eagerness to give a whole range of players a chance, that Sandro remains ostracised is frankly odd. 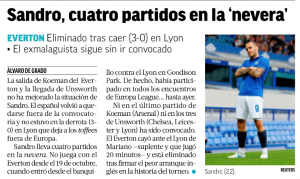 Fourteen league goals last season made Everton sign him, but now they’re pretty much ignored. Perhaps if he’d been born on the Wirral rather than on a Canary Island then Unsworth would be keener.

This situation isn’t going unnoticed in Spain, with Marca saying Sandro is being kept in the ‘fridge’. It’s especially disappointing for a player who thought the Everton move would help his World Cup chances.

There’ll be a queue of clubs waiting to give Everton their €6m back in January, although the player’s wages may now limit his destinations in Spain at least.