Everton defender Jonjoe Kenny ‘is expected’ to stay at Schalke long-term, although in what capacity is yet to be decided.

The right-back is spending the season on loan at the German club, having headed to Germany in search of regular first-team football.

That is something he has found in abundance, proving to be a huge hit for David Wagner’s side, making 21 appearances in all competitions to date.

Schalke are keen to keep him as a result, although as yet it is unknown what Everton’s plans for their youngster are beyond this season.

According to SportBild, however, he is set to stay in Germany for the ‘long-term’ with Schalke planning to contact Everton at the end of the season, when talks ‘will be intensified’.

Should he be too expensive, which could prove to be the case according to a report we covered yesterday; the Bundesliga side will instead try to secure another loan deal for the 22-year-old. 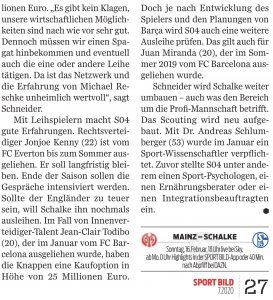 Everton’s stance isn’t mentioned, although there is no denying they will have to assess the situation with Kenny come the summer.

His performances in Germany may have convinced them he is worth a first-team place, with right-back still a problem position at the club.

If that is not the case, however, it seems unlikely Marcel Brands would sanction another loan deal while the defender’s stock is high and he can get a good price for him.