Yerry Mina last appeared for Everton in January, with the defender playing in the 3-2 FA Cup defeat to Millwall.

He didn’t cover himself in glory, and the defender’s time at Everton has been very mixed so far. There’s been good flashes and also concerns over whether Mina is worth the €30m+ which Everton paid for him.

Prior to the World Cup, it was thought the player would be sent out on loan by Barcelona, probably in La Liga. Any permanent transfer was expected to be worth less than half of what the Premier League club ended up playing.

The tournament in Russia made all the difference.

Catalan newspaper Sport has an article on Tuesday saying Mina has ‘disappeared’. The suggestion seems to be that it may not be totally down to injury, or Everton may not be being completely honest about the fitness situation.

This mirrors concerns which have come from the Colombian media, and there could be an issue over differing practices in different countries. In Spain, clubs release medical reports making it clear what an injury is and the expected return date, that certainly doesn’t happen at Everton and not in wider English football. 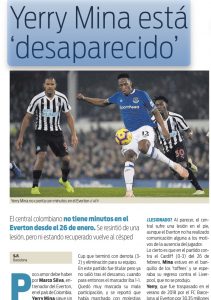