On Saturday we covered claims from Italy that an agent has offered Edin Dzeko to West Ham. Unfortunately for any Hammers interest, those claims were quickly followed by others explaining the AS Roma player wouldn’t be interested in a move to David Moyes’ side.

Dzeko has had a major disagreement with Roma manager Paulo Fonseca, so much so that their relationship is thought to be beyond repair.

The striker, Roma’s captain, was dropped from the squad for Saturday’s match against Spezia, and that’s why his future is in doubt.

Sunday’s edition of Gazzetta dello Sport talks of interest from the Premier League, with Manchester City and Everton now surprisingly said to be the picture to sign him. Dzeko would prefer to say in Italy, yet it would be no shock if he’d prefer working under Carlo Ancelotti or going back to City over the West Ham option. 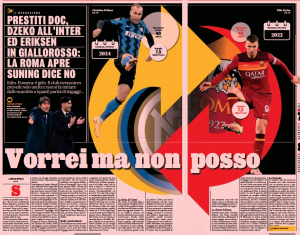 Any interested club would need to worry about the player’s €7.5m, after tax, wages and for Everton the option would surely only become realistic if they offload Cenk Tosun in the coming days.