Just when things were looking like they could get a little bit better, Everton’s season took yet another dark turn on Thursday night as they got thumped 5-1 at home by an Atalanta side currently 12th in Serie A.

Far from the surprise package on display last year, the Italian club still needed to get the job done to qualify, which they did admirably.

Of course, they were helped a lot by David Unsworth’s side, who Gazzetta dello Sport were not impressed by, at all.

Giving Everton a rating of 4/10 overall, it says a lot about the Toffees’ performance when the Italian newspaper decide Joel Robles, the goalkeeper who let five goals in, was their best player on the pitch. 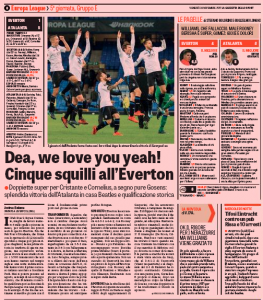 Both Wayne Rooney and Ashley Williams were given individual 4s, with the former described as a ‘walking monument’, and not in a good way, and ‘it was sad to see him in these conditions’.

Michael Keane’s transfer fee was also questioned, with his 4.5/10, described by the Italian newspaper as a ‘mystery of the English transfer window’.

Gazzetta feel this particular game showed his limits as a manager, and they believe the club urgently need a new boss.