An injury forced the Portugal international to wait until October to make his debut for the Merseyside club and since then he’s been a regular inclusion in the starting XI, finishing the season with 24 league starts.

Marco Silva has publicly expressed his desire to retain his compatriot, who has a very good market in the Premier League.

Today’s edition of Catalan newspaper Mundo Deportivo claims that Everton have an ‘option’ to sign the 25-year-old in the summer, but it is not a mandatory option to make the midfielder’s loan deal permanent.

Despite having a contract at the Camp Nou until 2021, the Blaugrana are willing to sanction his sale in the summer. 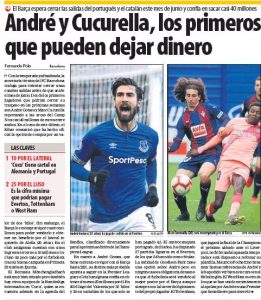 Ernesto Valverde’s side are confident of getting at least €25m for the former Valencia man and their idea is to sell Gomes to the ‘highest bidder’ in the transfer window.

Whether that will be Everton or another club is to be seen.