Given the Bundesliga side have a good record of bringing through young players, he’ll have hoped to have become part of the line to have succeeded by making the switch to German football and BVB.

Things didn’t go according to plan, and after a loan spell at Huesca, Gomez made a permanent move to Anderlecht in June of this year, and he may already be attracting the interest of clubs such as Everton.

In 16 Jupiler Pro League matches this season, the 21-year-old has scored five goals and added seven assists. His latest performance was against R. Charleroi S.C. at the weekend, when he scored twice in a 3-1 victory.

Tuesday’s edition of Belgian newspaper HLN has an article on the player’s progress, with it clear Anderlecht have been impressed by their summer signing. He started out his career as an attacker, but has been playing mainly as a left-back this season, and it’s clearly going well. 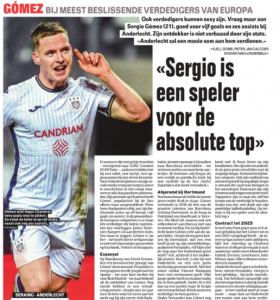 HLN talk up interest in the player, and to back that up they say a ‘pack of scouts’ were at the Charleroi match, with Everton among them. Lucas Digne is the undisputed first choice for Rafael Benitez, yet it’s been thought they should have added a fullback in the summer.

There’s no absolute certainty that Everton were watching Gomez specifically, yet that’s the hint.

It’s worth noting that for Spain’s U21 side, he’s been playing on the left or right of midfield.