Late on Wednesday, we covered some rather confusing claims from Tuttosport regarding Everton’s interest in Juventus’ Moise Kean, as the Premier League side were reportedly ‘pushing hard’ for a deal.

The Toffees have been after the young forward since January, and while a transfer seemed off the cards back then, it certainly isn’t now.

A contract expiring in June 2020 is the main cause of this, as he hasn’t put pen to paper on a renewal, and an incident while on international duty with Italy’s U21s made Juventus question his immature behaviour.

That’s why Corriere dello Sport on Thursday have a headline claiming the Serie A champions are torn between two routes: ‘educating’ Kean or ‘selling’ him? 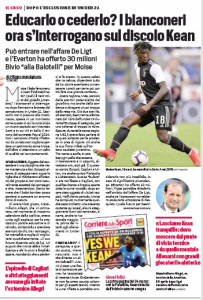 The former would the ideal scenario, since everyone is fully aware of the youngster’s talent, and Juventus know it would be a shame to lose that, but if the right offer comes along, can they really say no?

Tuttosport on Wednesday stated offers of €30-40m had landed on the Italians’ desk for Kean, yet there was no indication who they were from.

Corriere on Thursday, however, go straight to the point, and claim Everton ‘have offered €30m’.

Ajax are also interested, and there’s talk of Kean being part of a deal for Matthijs de Ligt, but Juventus would quite like a buy-back clause if they do part with him.

Somehow, we can’t see the Toffees agreeing to that, unless said clause allows for a considerable profit down the line.

After all, football remains a business.