Home Europe Everton offer interesting swap deal to try and get player in before...
SHARE

Corriere dello Sport report in their Sunday edition that Everton have offered Davy Klaassen to Inter Milan in exchange for Marcelo Brozovic.

Both are talented footballers not getting enough game time and exits for either could happen, but swap deals very rarely come off.

The Italian newspaper say Everton’s offer of Klaassen was knocked back, with Inter Milan telling the Premier League club only a straight transfer will do. Inter want the money to spend elsewhere and, judging from the reports, they don’t seem too keen on Klaassen.

On Saturday evening we covered a story from Milan which claimed a €16m offer had arrived from Everton for Brozovic. 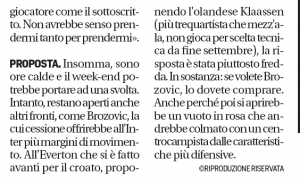 It’s possible, if the claims are true, that the loan offer was made first and then followed by the €16m.

Brozovic was linked repeatedly with an exit at the end of the last window, but stayed in Milan. A transfer looks on the cards sooner or later for the Croatian and would likely be a boost to the 25 year old’s career.