Back in 2017, Manchester City, among other clubs, were said to be interested in Paris Saint-Germain youngster Maxen Kapo.

Nothing came of it, but a couple of years later, the young forward is attracting interest from the Premier League once again, but this time it’s Everton.

According to France Football in their weekly magazine, the Toffees have come forward to offer the 17-year-old a contract ahead of his current youth one expiring in the summer.

Signing the deal would see him agree to his first ever professional contract, yet to do so with the Ligue 1 champions, who tend to be really slow in doing so. 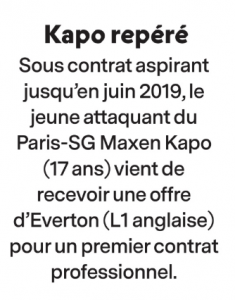 Already losing the likes of Kingsley Coman and Claudio Gomes to Juventus and Manchester City in the past, something needs to change at the French side to avoid their youth brain drain.

Of course, if Everton do snap up Kapo in the near future, they won’t mind one bit.