Home Europe Everton offer ‘very likely’ to be made ‘in the near future’, as...
SHARE

With the summer transfer window approaching, we’re getting to that time of the year again, when Premier League clubs start making moves for William Carvalho.

This time, it’s Everton who would be leading the race for the midfielder, as newspaper A Bola brings some interesting information about the chase today.

The outlet claims the Toffees are currently ‘in pole’ position to sign the 26-year-old, with the club having chosen him as a priority target for the summer market.

Even the player himself is said to be aware of that, and it’s ‘very likely that in the near future’ Everton officials come up with a bid for him. 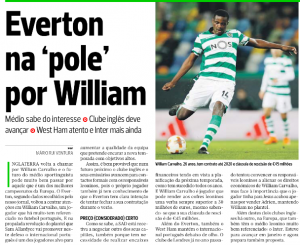 A Bola claims Sporting would be fine selling one of their captains, no matter if Carvalho or Rui Patrício, as they need some cash in the transfer window. The midfielder has a €45m release clause, but the Lions would start listening to the offers over €30m.

With Carvalho’s dream to play in the Premier League being reported for years now, it seems that Everton’s biggest issue would be to find an agreement with Sporting.

West Ham also get a mention for having tried to sign the midfielder last summer. But even though A Bola claims the London side are still interested, the newspaper doesn’t seem very confident that a bid from the Hammers will be made anytime soon.

Everton were brought into the Carvalho story on April 29th by Jornal de Noticias. It was then picked up by the UK media, with bits added on, and then returned to Portugal, with more added on.

If it carries on like this, there’ll be a report of him humming the Z-Cars theme soon.