There were mixed messages coming out of Italy at the weekend over Everton signing Moise Kean from Juventus.

It’s a transfer rumour which has been running for a few weeks now, and whilst at first it may have felt unlikely, with a stay at Juventus and potential loan then seeming the obvious option, now things genuinely look to be moving.

Monday’s edition of Corriere Torino, local to Juventus, reports Everton are in the ‘final stages’ of negotiations to sign the player. A meeting last week helped edge things forward, and the Premier League club are ‘tightening’ around the player.

A transfer fee is estimated at €40m, or at least that’s what Juventus are looking for right now.

With regards to a buyback, it was reported at the weekend that Everton aren’t keen on such an option being in the deal, and that was making things stall. However, there’s now a potential different plan, according to the Turin newspaper. 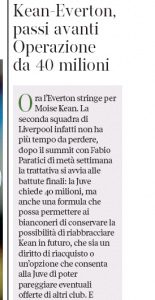 If they can’t get a buyback, Juventus would instead get a clause which allows them to match an acceptable offer from elsewhere. It’s not a great deal of power over the player’s future, but it’s better than nothing.

Moise Kean and his agent Mino Raiola are presented as keen on the idea, yet they haven’t shut the door to other clubs coming in.