Nice manager Patrick Vieira has admitted Everton’s Morgan Schneiderlin is an ‘interesting profile’ for the club amid talk of a move.

The Ligue 1 side have been heavily linked with a move for the Everton midfielder, with talks believed to have ‘intensified’ over the weekend.

L’Equipe broke the story of their interest last week and this was later followed by reports that the two clubs were negotiating over a €2m fee.

That was backed up elsewhere and added to, with claims that Schneiderlin is keen on the move and has already agreed personal terms with the French side ahead of the possible switch.

Vieira has now added fuel to those rumours by commenting on the Everton man while speaking at a press conference yesterday.

“In the physical, athletic aspect, we must be better, also in terms of aggressiveness,” L’Equipe report him saying, when asked about the type of player he wants this summer.

“We’re going to need talent, but we’ll also have to have a lot more character to help our young players progress. 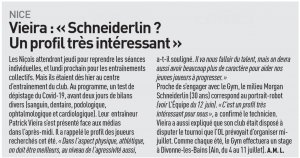 “He’s (Schneiderlin) a very interesting profile for us.”

While hardly an open admittance from Vieira that Nice are making a move for Schneiderlin, it’s clear he’s very much a player they’re looking at.

Everton fans would certainly debate whether he’s the man to look at if you’re looking for players to improve the physical or aggressive traits in your squad, however.

Schneiderlin has shown very little of either since his arrival from Manchester United, which is why they’ll be hoping Nice’s interest is a little further along that Vieira has suggested here.