AS now states the 28-year-old will have a ‘difficult time’ continuing at the club and Diego Simeone’s side idea is to cash in from his sale.

The newspaper once again discusses the clubs that are interested in the fullback, and it’s explained the player has a ‘great’ market in England.

Everton Newcastle and Wolves are mentioned, and the Premier League trio’s interest is again pushed forward.

In addition to this, Inter Milan, Napoli and AS Roma remain interested, while FC Porto and Benfica are attentive to the defender’s situation. Bayer Leverkusen want Arias, but on loan with a purchase option.

Kicker also reports the Bundesliga club’s interest in Arias, and managed to get a comment from Atletico sporting director Andrea Berta on clubs wanting to sign Arias.

“We are talking to Roma, Everton and PSG, but not to Leverkusen. A loan deal with a purchase obligation after ten matches is possible,” said Berta.

According to Kicker, Berta dismissing Leverkusen could be a ‘bluff in negotiations’ with the German club because they are ‘very much interested’ in the South American. 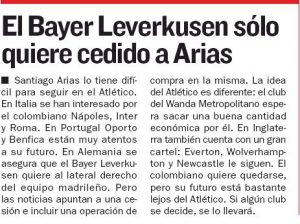 purchase option, if the player makes a minimum 10 appearances this season. As per the report, the fee would be set at €10-12m.

Atlético want to cut ties with the Colombian, and there are several clubs interested in him. It remains to be seen where Arias will end up before the window closes on October 5th.