If you’re an Everton fan, it’s fair to say you probably know a lot about Gabriel Magalhães at this point in time.

The centre back has been an ongoing rumour for at least six months, with him having been close to a move, far away from a move and then deciding on a move for at least the last two months.

Either way, there’s been plenty said about him in the interim, with many believing he would be an ideal signing if Everton can pull it off.

One man who certainly believes so is manager Carlo Ancelotti, who, if Gazzetta Dello Sport are to be believed, may be the reason Everton are facing competition for his signature.

The newspaper explains that the Italian is a big fan of the Brazilian defender, so much so that he recommended him to former bosses at Napoli, Aurelio de Laurentiis and Cristiano Giuntoli.

They agreed with the Italian’s assessment and so made him their number one target to replace Kalidou Koulibaly should he leave this summer.

That put them in direct competition with Everton, who have long been chasing Magalhães as they look for a centre back themselves.

And so the pair are now battling for his signature, with Gazzetta explaining that Napoli have offered €25m to Lille for the defender, while Everton have offered €21m. 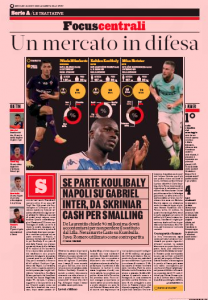 That would presumably put the Italians in the lead, but it’s all a matter of timing. They can’t make their move until they’ve sold Koulibaly and so far his biggest suitors, Manchester City, are yet to match De Laurentiis asking price.

They’ve currently offered €60-65m, which is not what he wants, so they are playing a waiting game to see if they can get the money they desire.

That, though, ‘could be dangerous’ according to Gazzetta. Why that is they don’t say, but presumably it would be to do with Everton.

If Napoli continue to delay, that gives the Toffees time to negotiate a deal with Lille and perhaps tempt Gabriel into moving to Goodison Park instead.

Of course, it’s a situation they wouldn’t be in if Ancelotti hadn’t been so forthcoming with information at his old club, although there’s not likely to be many on the Blue half of Merseyside who’ll lay any blame at his door.