FC Porto continue to be hopeful that Ivan Marcano will stay at the club after the end of the season, despite the expiration of his current contract.

The player is able to sign a pre-deal with any club by the start of the January, and that’s why he has been linked to the likes of Everton, Valencia and Inter Milan.

Today, A Bola reports that Porto are about to offer him a new contract, using the club’s salary cap to pay him €2m per season.

That’s a lot for Porto standards, as only Iker Casillas makes more at the club. The Portuguese side would also trust that a Champions League spot could convince the player to stay instead of going to those interested sides. 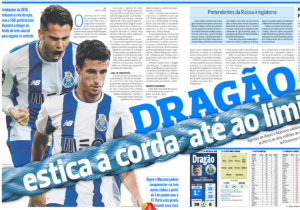 But A Bola makes it clear that Everton, Inter Milan and Valencia all have good conditions to offer him a decent salary as well, and a move to a place like Goodison Park could ‘create great impact in the defender’s career’.

So far, it sounds like none of these clubs have made a formal offer. But things should change by January, when we’ll see if they were really interested. Meanwhile, Porto are fighting for him to ignore advances from clubs like the Toffees and keep him at Porto.