On December 16th, we covered claims from Calciomercato.it explaining Carlo Ancelotti would be happy to bring Isco to Everton in the upcoming window.

Today’s edition of Mundo Deportivo explains the Toffees are one of the clubs waiting to see how things progress with the attacking midfielder’s case at Real Madrid.

Mundo states the ‘truth’ is there has been talk of the 28-year-old leaving Zinedine Zidane’s side in the winter market in search of regular minutes.

The Spain international has made only 11 appearances [including only three starts] in all competitions and he needs to decide whether to stay with Los Blancos or move away from the La Liga winners in January. 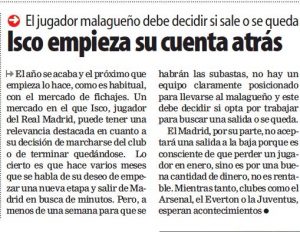 According to the report, no club has so far ‘positioned’ themselves to take the former Malaga star away from the Santiago Bernabéu.

Mundo adds Real Madrid will not cut ties with Isco next month, if they don’t receive a ‘good amount of money’.

Everton are cited as an interested party, and the newspaper adds the Merseyside club are waiting to see how things develop with Isco’s case.

Over at AS, it’s explained Everton are ‘interested’ in the player, but Sevilla are ‘best placed’ to sign him.

Isco wants to give priority to the sporting project and also consider the ‘quality of life’ for his family, and these two factors give an advantage to Sevilla.