Malcom’s agent Fernando Garcia revealed on Thursday that he will get in touch with AS Roma director of football Monchi regarding his client. The Spaniard has also admitted that signing Malcom is a “possibility” for the Serie A outfit.

The Bordeaux star’s contract runs down in 2021 and French newspaper L’Equipe claims the Ligue 1 outfit value him around €45m, a figure which seems to fluctuate.

Everton were believed to be favourites to secure the services of the player, until Thursday, and their interest in the player has ‘awakened’ other clubs like Roma and Leicester City.

The Italian club have entered the race to sign Malcom. So far, the two clubs have not made a ‘written offer’ to Bordeaux, but Roma’s interest in the 21-year-old could materialise quickly. Malcom’s representative also met the leaders of Roma last night to ‘get things done’. 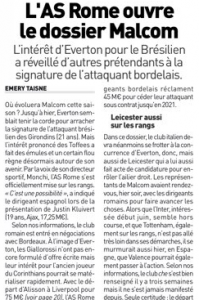 Roma have the cash at their disposal to sign Malcom, having sold his compatriot Alisson to Liverpool.

L’Equipe say Roma aren’t only up against Everton, but also Leicester City. The Foxes have ‘joined the ranks’ of clubs keen to sign the Brazilian this summer.

Tottenham, Inter Milan and Valencia are edged out of the race by the French newspaper.