Among the transfers that you may have missed at the end of the window given everything that was going on was Everton’s Moise Kean joining PSG on loan.

The move came as something of a surprise, with plenty left a little baffled why Everton allowed him to go without signing a replacement.

Either way, Kean has a chance to get his career back on track after a disappointing year at Goodison Park in which he completely failed to live up to his own hype.

He should have no problem doing that with the French giants, where he will find himself surrounded by world-class talent such as Kylian Mbappé and Neymar.

Well, Friday night saw the Everton loanee making his debut in the 4-0 win over Nîmes, and it’s fair to say that he got off to a very inauspicious start.

L’Equipe kick off the reviews and give Kean a four out of ten, the lowest rating for any PSG player in the game. Indeed, only two Nîmes players scored lower than him, which says a lot given they were beaten 4-0.

They say the striker ‘must set the sights’ after failing to score on his debut, although they do concede he was ‘unlucky’ to hit the bar with a header late on.

Either way, they label the striker ‘ineffective in front of goal’ and warn him he will have to avoid multiplying ‘the failures’ if he is to have a chance with PSG this season.

They also throw a stat out that highlights how poor he really was, explaining the striker managed the same amount of touches as Leandro Paredes, who left injured after 11 minutes.

The tone is very much the same as L’Equipe, as debuts go this was not great, and he’ll need to improve drastically moving forwards. 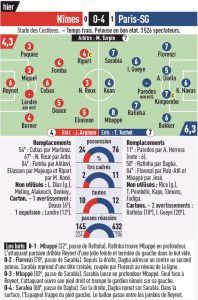 It’s not all bad for the Everton man, though, who finds an ally elsewhere in former Liverpool striker Djibril Cisse, who tried to explain away the performance.

“Rafinha is already at the heart of the game, so it’s easier for him to touch the ball and be technically fair because he’s very thin.

“Kean played next to Mbappé; there is neither Neymar nor Di Maria, so the man we must touch the most in the game, unconsciously, it is Mbappé to make the difference! So we forget Kean a bit!

“Whether we like it or not, this is his first game. It takes time!

“To play next to Mbappé, when we have just arrived, and we do not know the group, it’s complicated, and we know that we are not going to touch the ball a lot…”