After a disappointing year in England with Everton, it’s been a completely different tale for Moise Kean at Paris Saint Germain.

The striker had something of a rocky start when he joined the French giants on loan in the summer, but that has paved the way for him to be the current star of the show.

The youngster has been flying in recent weeks, to the point that France Football have elected to profile the Everton loanee and look at his career so far.

They describe him as a ‘Parisian revelation’ in the first half of the season, explaining how he ‘stands out and stands out’ wherever he has been so far despite the ‘shadow of Mario Balotelli’ that hangs over him.

First, there was Juventus’ youth set up, where Feice Tufano managed him for two years as part of the U17’s.

He explains how Kean was, and still is, and ‘exuberant boy’ who was ‘difficult to manage’ because of the strength of his character.

That was observed by those watching in the Juve dressing room when he made the step up at 16, where Mario Lemina observed a ‘hard worker’ and Medhi Benatia saw a ‘very discreet’ youngster working hard to make his way up the ladder.

Kean, say France Football, has only known an ‘accelerated speed’ in his career so far having raced to the first team from a young age.

Now he needs to ‘understand the time’; something Benatia admits he saw him struggle with at Juve, where he had to ‘vary his game’ and ‘work on the technical side’ of things.

There have been missteps for the Everton man, such as turning up late for training or his ill-advised lockdown party in England earlier this year. 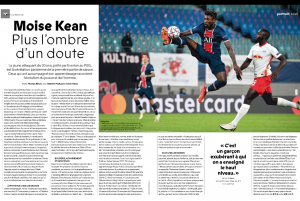 That is his one major downfall, according to Luca Clemenza, who trained alongside him in Turin as a youngster and believes his ‘temperament’ was capable of playing tricks on him at times.

Now, though, he has ‘grown up and put his mind at ease’ say FF, with Benatia concluding that he’s ‘going to kick ass’ in Paris this season as he was ‘destined to stand out from the crowd’.