Super-agent Mino Raiola is ‘looking for a compromise’ with Everton to help get Moise Kean back to Juventus.

That’s according to Tuttosport, who say the Blues striker remains an option for the Italian giants, who are overhauling their forward line this summer.

They’ve just completed a deal with Atlético Madrid to bring Alvaro Morata back to the club but are considering whether to add another backup option to their squad.

Should they decide to do so, then Kean is ‘the most concrete’ option to fill the role, and so Juve have been working on a potential return with his agent Raiola ‘for weeks’.

It’s stated that he is hoping to find a ‘compromise’ with Everton that would make a loan or a ‘long rent’ possible and allow the young striker to return to his former club.

Whether the Toffees will sanction such a deal isn’t mentioned, but the need to find a compromise suggests they aren’t keen on it.

There is no reason for Everton to be either. Carlo Ancelotti is a big fan of Kean and has made it clear he plans to have him as part of his squad, and unless they were making their investment back to fund a replacement, there’s no logic in letting him go.

Until Raiola can convince them there is, or get Juventus to pay up, it seems he will be staying at Goodison Park, where there are certainly still high hopes for him.

Hopes that are shared by former Everton striker Romelu Lukaku, who named Kean among his top Italian youngsters to keep an eye on. 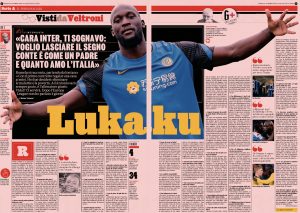 “Barella will be a very important player for the national team and for Inter,” he told Gazzetta Dello Sport.

“He has grown a lot in the last six months and is impressive with the ball and also physically, mentally.

“Esposito can also be an important player, but he must play more. With the mentality he has, and with more minutes on the pitch, he can give a lot. I also respect Kean. And Chiesa.”