Everton striker Moise Kean is the ‘main target’ for Juventus as they look to reinforce their forward line this summer.

That’s according to Tuttosport, who say Everton ‘could bet’ on sending the youngster back to Italy on loan to try and get him back on track.

Kean arrived at Goodison Park in a big move from Juventus last summer, with many at the time considering the transfer one of the coups of the summer.

Things did not go to plan, though, with the Italian struggling to establish himself under either Marco Silva or Carlo Ancelotti.

That has sparked talk that he could return to his homeland this summer, with reports about Juventus interest coming daily from Italy.

Tuttosport add their two pence today and say that, despite Juve pushing for a deal for Roma’s Edin Dzeko, they still want another striker and the ‘main target’ to fill that position is Everton’s Kean.

They explain that things ‘are not going very well’ for the young striker on Merseyside and the newspaper say he ‘would come on loan’ as the Toffees look to ‘relaunch the investment’.

In other words, Everton could send him back on loan to Juventus to settle back down, get himself comfortable and get his career, which has slowed down over the last year, back on track. 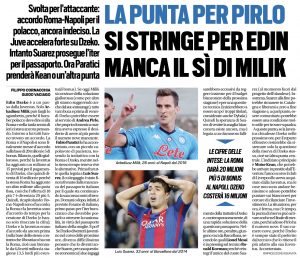 Tuttosport make no mention of the finances that would be involved but do say that the deal is at ‘a standstill’ at this point and may only happen at the end of the transfer window.

We should make it clear that this is nothing new from the newspaper, with several reports over the last two weeks stating pretty much the same, although it has also been said that Everton aren’t keen on a loan deal.

That would make sense given it doesn’t really make sense for them to weaken themselves and help Juventus.

A deal is far more likely if they were to sign another striker this summer, which could still happen, so perhaps that is where the idea of Kean’s returning happening late in the window comes from.

Until that happens, though, it seems unlikely any potential deal will happen.