Home Europe Everton may edge away from deal as club feel they can push...
SHARE

A couple of weeks ago, the Portuguese press reported that Marco Silva had been using Andre Carrillo’s World Cup performances as an argument for Everton to sign him.

But now it turns out that the good form shown by the Peruvian international in the tournament could actually make his departure from Benfica more difficult.

This Sunday, Portuguese newspaper O Jogo has a story claiming that the Eagles manager Rui Vitória is now thinking about keeping Carrillo in their squad for next season.

After spending a loan spell at Watford, the player would be close to convincing the club he deserves one more chance to prove himself, and should be doing preseason with them. 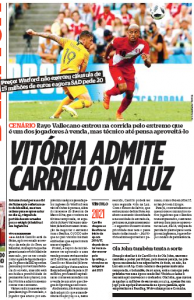 Now even if Carrillo leaves, his price is going up. O Jogo claims that the demand has now gone from €15m to €20m after the World Cup.

Besides Everton, O Jogo say Rayo Vallecano and other Spanish clubs are interested in the player as well.

If Everton were wavering at €15m, they’re hardly going to be keen to pay €20m. Carrillo was good at the World Cup but not so amazing that it negates his poor form at Watford and Benfica.

“I’m open to everything” – Raúl Jiménez happy at Wolves, but won’t rule out transfer

“I’m open to everything” – Raúl Jiménez happy at Wolves, but...

Tottenham director ‘working on first official offer’ for player – ‘Could...