Everton striker Moise Kean is ‘intrigued’ by a return to Juventus and his agent Mino Raiola is working to make it happen.

That’s according to Tuttosport, who say the super-agent is in ‘daily’ contact with Juve over the Italian striker.

They explain that despite Juventus working on a deal for Roma’s Edin Dzeko they are keen to add another striker alongside him and the idea is to bet on a young forward.

The ‘favourite’ to fill that role is Kean, who left the club in a €30m move to Everton last summer but endured a difficult first season at Goodison Park, failing to establish himself under Marco Silva and Carlo Ancelotti.

He finds himself out of favour this year too, with Dominic Calvert-Lewin Ancelotti’s preferred striker upfront.

Despite that, they are ‘putting up some resistance’ to letting him leave after their investment last summer.

Raiola has other plans, though, and the newspaper says the ‘powerful’ agent is not used to stopping when told no, instead doing everything to ‘fulfil the wishes of his clients’.

As such he is using his ‘excellent’ relations to try and get a deal done and is in daily contact with the Serie A champions about a move. 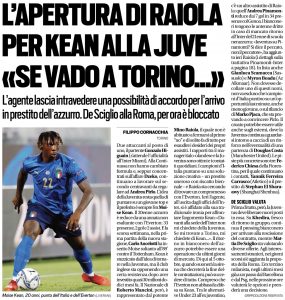 Juventus want to find a ‘creative solution’ with it posited that they would like an onerous loan with a ‘biennial redemption’.  In plain English, that means they want to pay for a loan this season and then buy Kean permanently in two years.

It is made clear, though, that this is one to keep an eye on for the end of the transfer window, with the newspaper speculating that ‘everything can happen’.

Among those things is Everton ‘dropping the defence’ they’ve put on the striker, with them not seemingly keen on letting him go back at this moment in time.