While the Everton board deliberate over their next manager, the man the fans want, Christoph Galtier, continues to be ignored.

While reports have indicated that the Ligue 1 winning coach has been spoken to by those in charge at Goodison Park, they’ve never seriously moved to try and hire him.

That is something Everton fans cannot get their head around, with many considering him the perfect coach to work under Marcel Brands and push the club forwards.

That is something he proved at Lille in the last few years, culminating in their superb title-winning campaign last year.

The league success was supposed to be the end of an era for Galtier, who is keen to leave this summer and believed he would be allowed to do so.

Indeed, he already has a deal in place to take charge at Nice, but as we explained yesterday, Lille aren’t willing to let that happen.

They’re playing hardball and, after providing the president’s stance on the situation yesterday, L’Equipe offer up Galtier’s side today.

They explain that he doesn’t want to return to Lille for next season and has ‘turned the page’ on the club.

He warned them he wanted out back in February and, despite having a contract until 2022, believed he would be allowed to do so freely.

His camp, therefore, ‘fell off their chairs’ yesterday when reading Olivier Létang’s comments regarding his stance on Galtier.

They were particularly unimpressed by Létang’s suggestion Galtier had caught them off guard, given he warned them of his intentions months ago and even proposed to forego the win bonus of €5000 per victory in his contract.

Those intentions were doubly confirmed in a meeting with Létang in April and then again in May when he informed the club his time at Lille was ‘definitely over’. 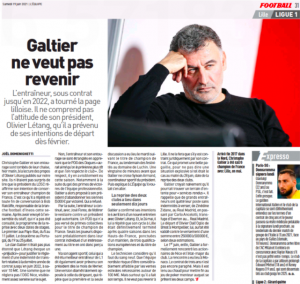 This is because Galtier believes new blood is needed in the squad, and they are in danger of being ‘considerably weakened’ by planned sales of €100m this summer, but, more importantly, feels he has ‘served his time’.

He will now only return if he is ‘legally obliged’ to do so and the whole situation ‘promises to be a mess’.

He had naively thought he would be allowed to leave for ‘services rendered’ and even cites the likes of Ancelotti leaving Everton for Real Madrid ‘without compensation’ as a reason he should be allowed to too.

Lille aren’t having any of that, though, leaving Galtier fuming and stuck in the middle, with a three-year deal at Nice being ‘kept warm’ in the hope he can go there as planned.

For now, though, he’s stuck in a ‘liar’s poker’ with his president, in a battle that doesn’t look like it will end anytime soon.