Fabio Cannavaro made an ‘excellent impression’ on Everton owner Farhad Moshiri and chairman Bill Kenwright when they interviewed him for the job this week.

That’s according to Tuttosport, who say the former World Cup winner is competing with Wayne Rooney to replace Rafa Benitez.

Cannavaro was named as a surprise candidate for the Everton job a week ago, with reports in Italy naming him as a potential candidate.

That was followed by claims that he had already held talks with those in charge at Goodison Park and made a positive impression during them.

Tuttosport back that up today, stating that Cannavaro held talks with Moshiri and Kenwright on Wednesday, although this was only a ‘preliminary chat’.

However, the former Guangzhou Evergrande coach made an ‘excellent impression’ on both of the Everton chiefs, who have taken a ‘key role’ in finding Benitez’s replacement. 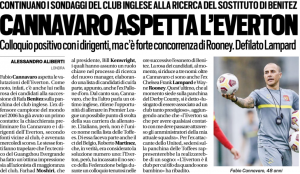 Their list of candidates for the job includes Cannavaro, and the Italian, who speaks ‘excellent English’, believes the opportunity could be the ‘turning point’ in his career.

He’s not the only name on the list, though, as Everton are also keen to speak to Rooney after his success with Derby County. Frank Lampard is another option being looked at.

Roberto Martinez was also on the list, but the Belgian FA blocked any move when Everton spoke to them in the hours following Benitez’s sacking.