Everton and Manchester United could be interested in a move for Roma right-back Alessandro Florenzi.

The Italian defender has been a regular at Roma this season, with nine starts in 11 league games.

He has found himself on the bench of late, though, with just two starts from their last eight league games, raising questions about his future.

Earlier this week we covered a report that Everton could be interested as Carlo Ancelotti is set to take over and now Manchester United have been added to the mix.

According to Corriere Dello Sport, ‘there’s talk in England’ (we’ve looked and there’s very little on it) both clubs are keen on the right-back and could move in January.

His agent, Alessandro Lucci, is said to ‘be receiving various proposals’, and is set to meet with Roma chief Gianluca Petrachi to discuss his client’s future after Christmas. 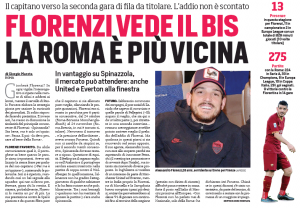 Everton and Manchester United are not the only interested parties, with Fiorentina and Sampdoria also admirers.

The two Italian clubs would look for a loan until the end of the season with a right to buy included at the end, but it’s not clear if Everton and Manchester United would look for a similar deal or a permanent move.