Colombia were eliminated from the 2018 World Cup by England in the knockout stages, but Barcelona defender Yerry Mina was the star player for the South American nation at the Fifa tournament in Russia.

Mina is a transfer target for clubs in England, Germany and Turkey. Borussia Dortmund and Fenerbahce are the two clubs linked with Mina from the latter two countries. From England, Everton and Liverpool are linked with the player.

On July 6th, we carried two reports from Mundo Deportivo, who claimed Everton are interested in signing the centre-back in the summer transfer window.

Today’s edition of Mundo Deportivo claims Barcelona are ‘waiting to see if Chelsea are interested’ in signing Mina. The La Liga winners are keen on Willian and are ready to include their player as a part of the deal to sign the Brazilian.

Willian is a target for the Spanish champions and the Stamford Bridge outfit are demanding €80m to sanction his sale. Barcelona deem the price tag too expensive and are willing to allow Mina to join them, if they’re interested in the player.

Barcelona paid €11.8m to Palmeiras for Mina in January. They are willing to do business if the potential suitors start making a bid from €30 million and include a buyback option. The report claims this seems to be a ‘good formula’ to appease all the parties involved.

Everton are easily the most linked English club with Yerry Mina and have been mentioned again by Mundo Deportivo today. 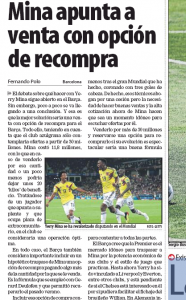 Whilst the Catalan newspaper mentions Liverpool, it must be noted that just a few days ago they said Barca ‘knows for sure’ Everton want the player, but they weren’t able to stand up interest from Anfield. Everton were said to be making efforts on signing and had ‘moved around’ the player.

Barcelona were also said to have admitted Everton are keen.

The situation we seem to have now is that Everton are keen, Liverpool have been rumoured, and Barca hope Chelsea can be tempted.