As we all know, one of Everton’s main aims this summer was to replace Romelu Lukaku, who ended up leaving in a £75m+ deal to Manchester United.

The arrival of both Sandro and Wayne Rooney seemed to appease the fans, but there were many rumblings that the Toffees were still looking for another forward, one that fit the Belgian’s profile a bit more.

Well, according to Gazzetta dello Sport, that was still the case on transfer deadline day, as the Italian newspaper reveal Everton made a last minute offer for Fiorentina’s Khouma Babacar. 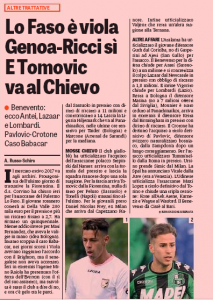 Also linked with Brighton, the Senegalese goalscorer rejected a move to AMEX Stadium, but with Ronald Koeman’s offer, it was the Serie A side that said no.

Gazzetta say the offer was presented by none other than Mino Raiola (with the help of his assistant), but it seems Fiorentina weren’t happy enough with it.

Whether this was because of a lack of time to find a replacement or it wasn’t high enough isn’t made clear, but one thing is certain: Everton still don’t have that like for like Lukaku replacement.