On Thursday, a surprising story came out of nowhere stating that Everton had come forward to have a chat with Lorenzo Insigne about a potential transfer.

The logic behind it made some sense, since the winger has already worked with Rafa Benitez during their time together at Napoli, but beyond that, it seemed like a long shot.

The whole thing is backed up by Il Mattino on Friday, who explain Everton did in fact have ‘a contact with the Napoli captain’s agent’.

The two parties proceeded to have what is described as an ‘exchange of information’ or ‘an enquiry to understand if grounds existed for the feasibility of a negotiation’. 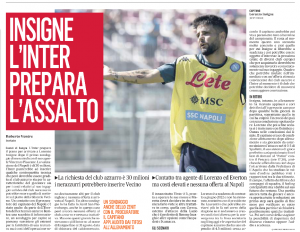 However, ‘the costs of the operation are decidedly high for the English club’ and ‘Napoli received no offers’.

So, it appears Everton did indeed reach out to see if they could bolster their attack with a player Benitez knows well, but, once again, money remains an issue, which appears to be the story of the Toffees’ transfer window this year.