Ligue 1 side Nice are planning some sales this summer, and Thursday’s edition of L’Equipe reports Allan Saint-Maximin is ‘first in line’ to be edged out of the club.

For quite a while the 22 year old has been linked with a move to AC Milan, and the French newspaper says the Serie A side started transfer talks earlier this year.

They’re not the only ones keen, with interest also coming from England. Everton, the only Premier League club named, are said to have been in some sort of contact over the potential signing.

He has a €60m exit clause (although such clauses aren’t actually legal in France) but it’s thought the transfer wouldn’t even reach half of that, after a disappointing season. 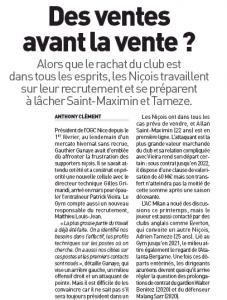 According to the same report, Everton are also keen on a teammate of Saint-Maximin.

Along with Atalanta, they ‘covet’ 25 year old Adrien Tameze.