Home Europe Everton loanee’s form drawing a lot of praise, would be ideal for...
SHARE

Bought from KAS Eupen after a very long and drawn out saga, Everton’s Henry Onyekuru was sent back to Belgium, this time at Anderlecht, in order to help with work permit issues.

Carrying his old club at times, many were looking forward to see how he fared in a better team, and while the Pro League champions themselves haven’t played well, the 20-year-old has stood out nicely.

Scoring four goals in his last four games, including the winner at the weekend against Standard Liège for Nicolas Frutos’ last match in charge as interim manager, the Everton loanee is receiving a nice chunk of praise for his decisiveness.

In fact, it’s his ability to still produce a goal or a moment of magic even if he isn’t having a good game that has caught the eye the most, as well as his never say die attitude. 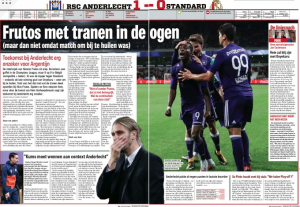 Regardless of how many dribbles or actions he misses, he will never stop trying, always running at people and trying to make something happen.

For Everton and Ronald Koeman, currently struggling to put two results together, having someone like Onyekuru in the team would be ideal.

The Goodison Park faithful will seemingly have to wait until at least next year to see this exciting talent grace a Premier League football pitch.

However, it’s something for them to look forward to.