There’s been injuries and a lack of selection, but the Everton owned player hasn’t found the back of the net in 53 matches.

Marca report today that before signing for Everton, Sandro had been on the verge of an Atletico Madrid medical. He ditched that plan to take up the Premier League opportunity, and it hasn’t gone at all well for him since.

Now at Valladolid on loan, he had the perfect opportunity at the weekend. Facing the club he’d turned down, Atletico, Sandro had a penalty, which would have won the game.

Of course, he missed, yet the reaction from fans and club has been positive. Similar to most places he’s been, the 24 year old is well liked. He may not be able to find the back of the net, but there’s never any questioning of his effort or attitude. 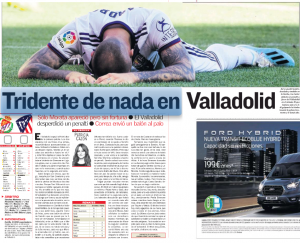 Valladolid manager Sergio Gonzalez is quoted by AS as saying: “He needs to reset. We require him to compete, to press… Success is something more personal. He’s doing everything right, he knows that the teammates are all on his side and he can turn it round, sure. We tell him to clean his head.”