Henry Onyekuru’s time at Anderlecht during the first half of the season before his knee injury was an interesting one to say the least.

Scoring nine goals before getting injured, the Nigeria international was, despite his ability to find the back of the net, criticised by his manager, Hein Vanhaezebrouck for struggling to follow instructions and track back.

However, since his return to Everton to get treatment, the reigning Jupiler Pro League champions have struggled for form and sorely lack Onyekuru’s decisiveness.

Het Nieuwsblad on Monday decided to write a small note to 26 players at Anderlecht, including the Everton loanee, to help turn around the situation. 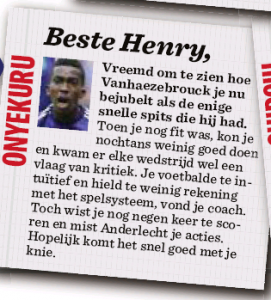 They wrote: “Dear Henry. It’s strange to see how Vanhaezebrouck is now lauding you as the only quick striker he had. However, when you were fit, you could not do much good and there was a flurry of criticism.

“You played football too intuitively and didn’t take into account the game system enough, according to your manager, yet you managed to score nine times and Anderlecht misses your actions. Hopefully, your knee will be okay.”

With 10 goals in 28 appearances, the 20-year-old managed to show he was able to prove himself at a higher level, including the Champions League.

While there is no return date for the Everton winger just yet, there’s now hope he could be back before the end of the season.