The forward last scored a goal in November 2017 and had an opportunity to end a long spell of goal drought this month against Atlético Madrid. However, he failed to convert from the penalty spot.

It’s not just poor form, but injuries have also stopped him from featuring regularly. A muscle injury forced him to miss Valladolid’s clash against Real Madrid and Levante in August.

With club football taking a break because of international fixtures, Valladolid scheduled a friendly tie against local side Salamanca CF and during the game, the Toffees owned player suffered a hamstring injury.

With the latest setback, Friday’s edition of Sport claims the Everton owned player is living a ‘real nightmare’ at Valladolid. 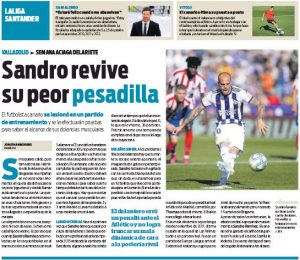 Despite all the misfortunes, the Valladolid fans continue to ‘massively support Sandro’. That’s because he has won their hearts and the supporters appreciate his hard work.

As and when the player ends his goal drought, Sport states Sandro will be ‘raised to the altars’ by the Valladolid fans. However, that’s unlikely to be anytime soon because of his latest injury blow.