Despite the good start to the season Yannick Bolasie had at Sporting, things haven’t been so great for the Everton loanee lately.

Portuguese newspaper Record has a piece today explaining how the player has lost importance in the Lions’ squad, making his future at the club a little unpredictable.

Bolasie was sent off in a cup match against Braga on January 20th. He missed the following match against Marítimo due to suspension, but even after that, he didn’t get back in the team.

Manager Silas has left him out of the games against Braga and Portimonense, later claiming that no one is ruled out from his choices, since and it’s all a matter of form. 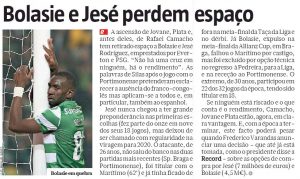 Record writes this situation could have some influence on Bolasie’s future at Sporting, since the Lions must soon choose to whether to sign him permanently from Everton or not. The Lisbon side would have to pay the Toffees €4.5m to do so.

Club president Frederico Varandas claimed last week that his decision regarding this issue has already been taken, but it seems he’ll keep the mystery until the end of the season.

Bolasie has two goals and four assists in 22 appearances for Sporting so far.