It doesn’t matter if Everton signed Allan and Abdoulaye Doucouré in the summer, there remains a need for a more creative midfielder at Goodison Park.

James Rodríguez has been used mostly down the right hand side since his arrival, meaning it’s been up to either André Gomes or Gylfi Sigurdsson to be the creative fulcrum in that midfield three.

That hasn’t worked all that well, with the Iceland international picking up just one assist in his eight appearances, meaning Carlo Ancelotti could be looking for an upgrade in the role.

This, according to Il Tempo on Wednesday, could be Lazio’s Luis Alberto, who fans will know from his time at Liverpool, following the Spaniard’s recent fallout with his club, criticising their decision to buy a new luxury plane for the squad instead of paying the players their full wages during the pandemic.

He did so on Twitch, and has faced some criticism, leading to him potentially getting fined up to €70k by the Serie A club.

On top of that, he could be omitted from Simone Inzaghi’s squad for the upcoming fixture against Crotone, with questions now being asked about his future. 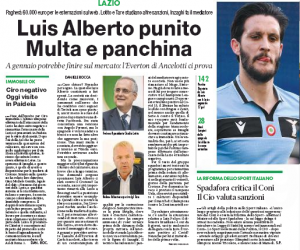 That’s when Il Tempo state ‘in January, the assault from Carlo Ancelotti’s Everton could arrive, in search of a quality midfielder for build-up play’.

There’s also Sevilla to be wary about, where Alberto grew up, before his move to Liverpool, but Inzaghi remains a staunch advocate of the Spaniard and would rather not have to make do without him.

This all comes a couple of months after the 28-year-old put pen to paper on a new five-year contract, meaning that regardless of his relationship for the club, they aren’t going to let him go for peanuts.

Oh, and let’s not forget the fact he spent three years contracted to Liverpool, too.