Everton striker Moise Kean is an option for Juventus this summer as the Italian side look to add to their forward line.

That’s the word in Italy today, with various sources covering the Serie A giants’ interest in their former protégé.

Kean endured a difficult first season in England last year following a move to Goodison Park from Juventus, struggling to adapt to life in the Premier League and establish himself in Everton’s first team.

That has sparked rumours he could look to return to his homeland, with several claims over the last few weeks that Juventus want to bring him back.

That situation is covered in Italy today, with Sky Sports Italy journalist Gianluca di Marzio reporting that the Everton striker is a ‘hot name’ for Juve who are looking at him to fill the role of the fourth striker in their squad. 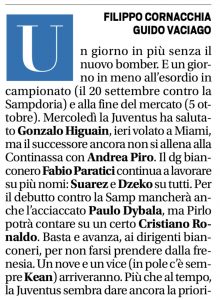 They would like him on a loan deal, but that is ‘not accepted’ by Everton, which is something we’ve seen stated on several occasions over the last few weeks.

This is backed up by Tuttosport somewhat, who say that Juve are looking for a ‘nine and a deputy’ to arrive this summer and, in regards to the latter, ‘Kean is always on pole’.

Gazzetta Dello Sport also offer their stance, stating that Kean is a ‘serious candidate’ for the ‘second place’ in Juve’s squad but it ‘won’t be easy’ to reach an agreement with Everton. 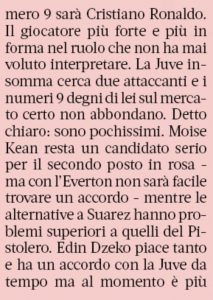 That’s slightly different to what the others are suggesting, with Gazzetta’s stance seemingly that Everton are completely opposed to letting the striker go, rather than just not wanting to sanction a loan deal.

Either way, it’s clear that Juventus are interested in bringing him back, but Everton aren’t keen on letting him go.

That means this rumour could end up dragging on right up until the end of the window, with plenty left to come from it in the coming weeks.