One of the up and coming talents in Marseille’s youth academy, Isaac Lihadji feels he’s ready for first-team football, and it appears André Villas-Boas is in agreement with him, playing him a number of times in pre-season.

That being said, the 17-year-old still hasn’t signed a professional contract with the French club, and with just one year left on his youth one, clubs are circling.

We’ve already covered previous claims from La Provence that Manchester United were ‘ready to acquire’ Lihadji should he decide against committing to his childhood club, and now Everton have joined the mix.

This piece of news comes from the same newspaper, who explain Marco Silva’s scouts have joined Ole Gunnar Solskjaer’s and Barcelona’s in tracking the Marseille born player. 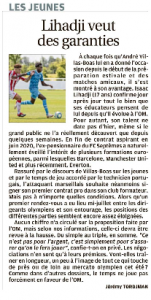 Lihadji is intent on committing his future in the south of France if he can, but La Provence explain he won’t do it just for the sake of it, wanting guarantees he will feature in the first-team in the upcoming campaign.

For now, the player and Marseille are ‘still some way off’ an agreement, and the talks remain at an early stage, but it’s definitely not about money for the winger.

He just wants to play, and preferably wants to do so with his current club.

If they can’t give him that, then he might try his luck elsewhere, which is where Everton and Manchester United could come in.