Seemingly close to securing the signing of Allan from Napoli, Everton aren’t quite done in Italy if today’s Italian media are to be believed.

Sorely needing a new midfielder or two (James Rodríguez doesn’t appear to be too far behind either), the Toffees also need some help at the back, more specifically down the right.

Already having Seamus Coleman there, the Goodison Park club need competition for the Irishman, and while they have Jonjoe Kenny for that, he doesn’t appear to be enough.

That’s why a number of players around Europe are being looked at, such as Santiago Arias or Alessandro Florenzi.

We’ll be focusing on the latter of those two, as the right-back, who once appeared to be an immovable object at AS Roma, is on his way out. 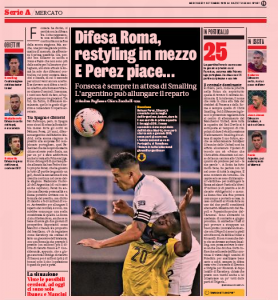 That was made clear last season when he was sent on loan to Valencia, and now there are a couple of clubs hovering around him.

Today’s edition of Gazzetta dello Sport make it clear that interest from both Everton and Europa League winners/qualified for the Champions League Sevilla in Florenzi is ‘still alive’.

So if you were worried your team had forgotten about their right-back position with little transfer news in that area for the past few days, don’t worry, they haven’t.

They were probably just dealing with Allan related stuff.