A couple of weeks ago, we had been covering the bizarre situation of Ajdin Hasic at Dinamo Zagreb.

To explain it quickly, the Ukrainian side produced a contract extension and a recision for two different scenarios, and made a mistake by sending the latter one to the player’s father. The deal was signed, and the teenager was released from the club because of an error.

That report said that Everton were among the many clubs interested in him, with the Toffees’ chase being repeated by the local press a few days later.

Benfica are one of the interested sides as well, and that’s why O Jogo managed to speak to Hasic’s lawyer to know more about his real situation.

The Portuguese newspaper have backed up Everton interest, and also linked several other clubs. 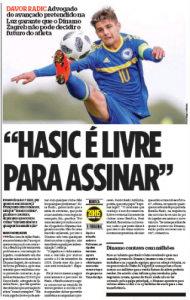 “He is a free player and can sign with any club. There are not any problems,” Davor Radic told O Jogo for their paper edition. “It was a termination by mutual agreement. The player and Dinamo reached an agreement. It was not a unilateral termination, so Dinamo do not have any rights over the player, they are not entitled to any compensation.”

Radic made it clear that he’s just his lawyer, and didn’t want to comment on any transfer rumours, as this is business for the player’s agents.

Dinamo were reportedly expecting to make something between €10m and €15m with Hasic’s sale, so getting him for free doesn’t sound too bad.