Everton are one of several Premier League sides to have made ‘informal contacts’ for Sporting Club de Portugal star Matheus Nunes.

That’s according to A Bola and Correio da Manha, who both say the Blues have revived their interest in the Brazilian midfielder.

Everton chased Nunes signature throughout last year’s summer transfer window and, at one point, appeared to be close to getting a deal over the line.

That never ended up happening, though, with restrictive finances and then manager Rafael Benitez putting an end to the deal.

Nunes went on to enjoy a strong campaign in Portugal, with four goals and five assists in 50 games in all competitions and several impressive displays, particularly against Manchester City, which earned him praise from Pep Guardiola.

That’s led to interest in him this summer, and Everton are again one of the clubs in the mix, according to reports in Portugal.

A Bola report that he is a ‘desirable target’ and Everton, among other Premier League clubs, have made ‘informal contacts’ for the 23-year-old. 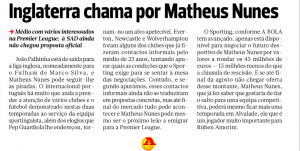 They are ‘trying to find out’ what conditions Sporting would need for a transfer, and as yet, the talks have not resulted in ‘concrete proposals’ arriving.

Correio back this up, stating that Everton’s interest has ‘arose’, but the Lions have made it clear they want €40m. A Bola also have his asking price in that ballpark but say it will take €45m.

Sporting are already looking at replacements, so they seem to think a deal could be on the cards, and Nunes has also made it clear he would ‘like to make the leap’ but so far, there’s been no official bid to make that happen.