Home Europe Everton ‘at the head’, offer could come ‘in the coming days’ –...
SHARE

Everton are yet to make an ‘official proposal’ for Sporting midfielder Matheus Nunes, but that could change ‘in the coming days’.

That’s according to Record, who say recent reports that a move to Goodison Park is imminent are wide of the mark.

Yesterday we covered comments from CMTV pundit Fernando Mendes, who stated confidently that Nunes was going to Everton, and a deal was practically done.

He didn’t provide any details on the transfer, just that he’d heard it was done and the player would be moving this summer.

Record cover that today and say while Nunes is a player who ‘arouses great interest’ in the market, there is no official proposal at this moment in time.

Everton are ‘at the head’ of the queue for his signature, and the Brazilian had ‘one foot and a half’ on Merseyside earlier in June, when it appeared Nuno Espírito Santo would be joining the club. 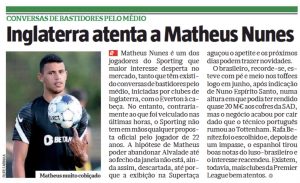 However, he went to Tottenham, and the move ‘fell through’ as Rafa Benitez arrived to replace Carlo Ancelotti instead.

That led to something of a ‘stalemate’, but the Spaniard has ‘some very good notes’ on the midfielder, and so Everton’s interest has been ‘rekindled’.

They are yet to make their move, but a transfer has not been ruled out by Sporting, and there’s a feeling the ‘coming days’ may bring news, and an offer, after Nunes’ recent impressive display in the Super Cup ‘whetted the appetite’.