Four days ago, we carried a report from Mundo Deportivo, who claimed Everton have joined the list of clubs interested in Barcelona’s Jean-Clair Todibo.

On January 5th, the same newspaper explained the centre-back wants ‘a few more days’ to decide on transfer and reports of agreement with AC Milan were also denied.

Monday’s edition of Mundo Deportivo once again insists there’s no agreement with the Serie A side for the Frenchman’s transfer, despite Milan officials making a trip to Barcelona.

Apart from Milan and Bayer Leverkusen, Carlo Ancelotti’s side, along with Schalke and Hertha Berlin were added to the list of suitors for the 20-year-old. All these clubs want to sign him on a loan deal until the end of the season. 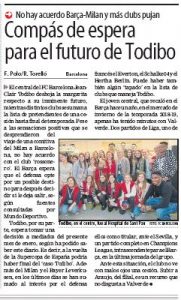 Mundo adds the defender is expected to make a decision on his future in mid-January.

Barcelona, on the other hand, are waiting for Todibo to decide, so they can start considering negotiations.

With no agreement between Milan and Barcelona for Todibo and with the player not yet deciding on his future, Everton still have some hope.