Home Europe Everton ‘giant’ is ‘being followed’ by club ahead of January – On...
SHARE

Everton defender Yerry Mina ‘is being followed’ by Napoli as they look to sign a central defender in the January transfer window.

That’s according to Gazzetta Dello Sport, who say the Colombian is on a list of potential targets for the Italian side.

The newspaper explains that Napoli’s focus for January has been focused on their defence for some time, but the departure of Kostas Manolas to Olympiacos has ramped up that need.

The club also need cover at left-back, though, so are moving towards focusing on a player who can cover multiple positions in the backline.

There are several options on the table, with Attila Szalai, Jhon Lucumi, and Everton’s Yerry Mina currently on the list.

The other two are further up that list at this moment in time, but the Colombian is ‘being followed’ nonetheless, with him described as ‘a giant’.

There is no mention of whether Everton will sanction a transfer, but Mina will be entering the final year of his contract next summer, and there has been no sign of a renewal. 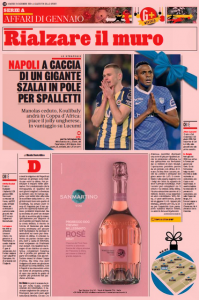 There have also been comments recently from manager Rafa Benitez, who has seemingly grown frustrated at Mina’s injury problems and lack of availability.

That has opened the door to a transfer, particularly as the Blues need to raise funds for transfers themselves, and Napoli have already been credited with an interest.

Gazzetta have now backed that up, and at the minute it appears Mina is just on a list, but that can always change quickly once the madness of January takes hold.