Everton will have to pay at least €22m plus bonuses if they want to complete the signing of defender Gabriel Magalhães from Lille this summer.

That’s according to L’Equipe, who say the centre back is set to leave the French club after manager Christophe Galtier confirmed he and Victor Osimhen would be moving on this summer.

Magalhães has been heavily linked with a move to the Premier League and particularly Everton, who are thought to have identified him as one of their chief targets.

Indeed, it appeared as if the Blues had wrapped up a deal for him not long ago, with them reportedly agreeing on a deal with both Lille and Magalhães and the player completing a medical.

However, that has not been concluded, with the player seemingly holding off on finalising as he waited to see if other offers arrived.

One now has, with Napoli believed to have also made their move as they look to replace the departing Kalidou Koulibaly.

It was reported that they had negotiated a price around €22m and L’Equipe confirm that is certainly the ‘least’ any interested club will have to pay, with Lille also looking for bonuses on top.

They also confirm that there are two interested parties at present, Everton and Napoli, suggesting it is now a race between those two to see who will win Magalhães signature. 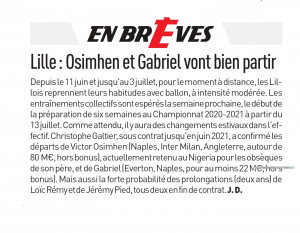 And much of that is likely to depend on where Napoli finish. If they can secure Champions League football, they would presumably be the more attractive proposition this summer.

Failure to do so, though, and perhaps Everton will be able to use the lure of Premier League football and the opportunity to work under a world-renowned coach like Carlo Ancelotti to their advantage and tempt him into choosing Goodison Park as his next destination instead.