Lille defender Gabriel Magalhães ‘will go to Everton’ this summer after they beat Napoli in the race for his signature.

That’s according to Corriere Dello Sport, who say that despite being courted by Napoli, the Brazilian defender has elected to move to the Premier League.

Gabriel has been heavily linked with a move away from Lille for several months, with Everton among his numerous suitors.

They appeared to have a deal wrapped up for him earlier this year only to then pull back as a result of the Coronavirus outbreak.

Since then there has been a constant change in the story, with Everton either leading the race, being behind Napoli or being out of it entirely depending on the source.

There have even been claim of new suitors, with Arsenal and Manchester United both credited with an interest in recent weeks.

Indeed, La Voix du Nord in France have the Gunners at the front of the queue and say Everton’s efforts have ‘run out of breath’ – in other words, they’ve given up.

Corriere say differently, though, and report that the 22-year-old ‘will go to Everton’ this summer, with Carlo Ancelotti ‘waiting for him there’. 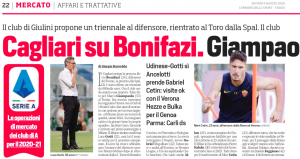 That may sound like excellent news for the Blues, it’s undoubtedly much more positive than reports elsewhere, but it feels more like a guess from the Italian paper than anything else.

They offer no details on the transfer, for example, or any explanation as to why he is going to Everton instead of Napoli.

It’s simply a throwaway line in a wide-ranging piece on transfers that could affect Serie A.

Add that in with the fact they’re the only ones saying he’ll end up at Goodison Park, while others, like the reliable Lille local newspaper La Voix du Nord, are saying Everton are out of it, and it makes things dubious at best.

The most likely scenario is that several clubs are still trying to secure Gabriel’s signature and Everton are among them but, as has been the case for several weeks, nobody is on the verge of finalising a deal.