Home Europe Player ‘expected’ to decide on Everton move by the end of the...
SHARE

Lille defender Gabriel Magalhães is expected to choose between Everton and Napoli by the end of the week.

The Brazilian defender has been heavily linked with a move away from the Ligue 1 side for several months, with Everton chief among his suitors.

They are keen to add a centre back to their squad this summer and were reported to have wrapped up a deal for Magalhães earlier this year.

However, the Coronavirus epidemic appeared to have scuppered their plans with several claims they had pulled out of the arranged deal and the virus had ‘blown’ their chances.

The sense that the move wasn’t happening was further added to when Napoli appeared on the scene, with it made clear they were determined to sign Magalhães as a replacement for Kalidou Koulibaly, who is expected to leave in this transfer window.

L’Equipe, though, state the Blues are very much still in the running and will learn by the end of this week whether they have won the race.

They explain that Magalhães is set to depart in a €22m deal as he is determined to break into the Brazilian national team.

Thus he is ‘expected’ to choose between Everton and Napoli by the end of the weekend, with them seemingly the only two sides competing at this moment in time. 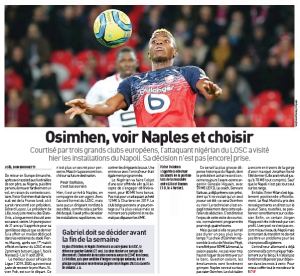 The newspaper makes no indication as to which way he will choose, but the fact they state Everton are still an option is vastly different from the reports over the last week or so.

On paper, Napoli is probably the more attractive option for him, but his playing time would be dependant on Koulibaly leaving, which isn’t a certainty given his high asking price.

Everton, on the other hand, can guarantee first-team football, in the Premier League to boot, and the chance to work with Carlo Ancelotti, a fact that should also work in their favour.