Everton are ‘fond’ of Napoli midfielder Allan this summer and the Italian side have lined up a Blues flop as his replacement at the club.

The Brazilian has been heavily linked with a move away from Naples since January having seen his relationship with the club sour since last year.

A failed move to Paris Saint Germain, coupled with a decreased role under Gennaro Gattuso since he replaced Carlo Ancelotti, has seen talk of a move away this summer as Napoli eye something of a rebuild.

Everton, courtesy of Ancelotti’s presence on the touchline, have been consistently named as suitors since the January transfer window when it was claimed they had a bid turned down.

The rumours have not died off since then, with Everton still in the hunt for a central midfielder and Allan thought to be towards the top of their list.

Corriere del Mezzogiorno cover the situation today and claim that Everton remain ‘fond’ of the midfielder and as such, Napoli are lining up replacements.

One of them is CSKA Moscow midfielder Nikola Vlašić, who, as Everton fans will be well aware, had a very unsuccessful spell at the club between 2017/2018 before being sold to the Russians for £14m in 2019. 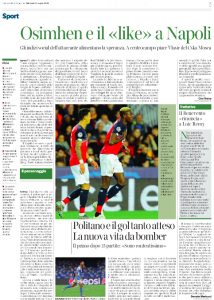 He’s since shone in Russia, and that’s caught Napoli’s eye, who are eyeing him up to replace Allan should he leave.

It’s explained that they do not want to add ‘muscle weight’ to the midfield should Allan leave but want more ‘quality’, especially in terms of dribbling, and Vlašić fits the profile.

Now, the newspaper makes no mention of an Everton bid for Allan or anything of that nature, so it’s not much of an update on what we know already.

The interesting part is that Napoli have already lined up a replacement and seemingly have a plan in place for him to leave.

That indicates they truly believe it could happen this summer, which is a boost to Everton, whose decision to sell Vlašić last year could end up working in their favour this summer.