Patrik Schick has, over the past few years, enjoyed a rollercoaster of a career, going from prodigious starlet at Sampdoria to disappointing flop at AS Roma, before finding form again in Germany, where a loan to RB Leipzig earned him a permanent transfer to Bayer Leverkusen.

The Czech Republic international performed adequately last season, scoring 13 goals in 36 appearances in all competitions, but it’s at the Euros that the 25-year-old has really demonstrated his ability, helping his country reach the quarter finals with five goals in five games, including a potential goal of the tournament against Scotland.

This has reportedly reignited interest from the Premier League in the striker, where Everton are taking an interest in him.

That’s according to Gazzetta dello Sport, who state the Toffees ‘have excellent references’ of Schick at Goodison Park, which we can only assume stem from Marcel Brands rather than Rafa Benitez. 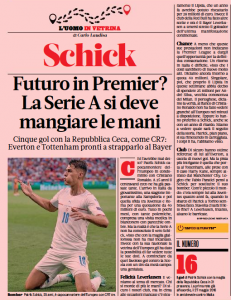 This suggests Everton and/or their director of football have been tracking Schick for quite some time, as they look to bring in a bit more backup for Dominic Calvert-Lewin going forward.

The Josh King experiment didn’t work, and with Richarlison normally performing better coming off the left than playing through the middle, a new striker is likely needed.

As for the price, ‘the costs would again be very high’, and Gazzetta reckon that €40m could be enough to convince Bayer from letting him go, allowing them to make a profit on a player they spent €28m on last summer.